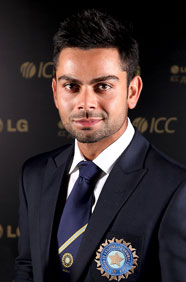 Virat Kohli is the current poster boy of Indian cricket with MS Dhoni having retired from Test cricket. His captaincy style has already won him admirers on and off the field. As a batsman, he has continued his rich vein of form. The 27-year-old from Delhi is also one of the most sought-after sportspersons by top brands such as Audi, Adidas, Pepsi and Oakley.
Fast Fact: UK magazine SportsPro rated him as the second most marketable athlete in the world in 2014.