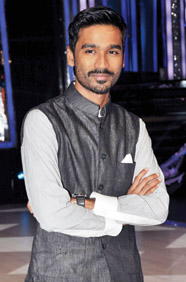 Dhanush knows how to keep his fans and the box office in high spirits. He starred in three films (including the Bollywood film Shamitabh where he shared screen space with Amitabh Bachchan) and also produced three movies in the period under review. His Tamil film Maari is said to have grossed Rs 60 crore within three weeks of its release. But the high point for Dhanush came at the 62nd National Awards, held in early 2015, when the film Kaaka Muttai, which was also produced by him, was judged the best children's film.
Fast Fact: Dhanush made his Bollywood debut by replacing Shahid Kapoor as the lead male actor in the 2013 hit hindi film Raanjhanaa.