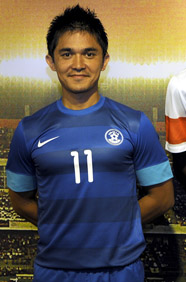 The Indian football captain has debuted on the 2015 Forbes India Celebrity 100 List despite the team languishing at No. 172 in the FIFA World rankings. Chhetri got a big boost this year when ISL outfit Mumbai City FC picked him up for Rs 1.2 crore, the highest amount paid for any player in the league. The 2015 season is underway and, at last count, Chhetri has six goals and one assist against his name in his seven appearances.
Fast Fact: With his appearance for the Kansas City Wizards in 2010, Chhetri became the first Indian footballer to play in Major League Soccer in the US.