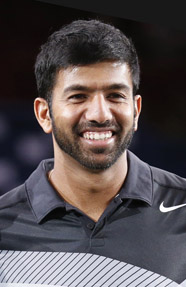 The big-serving Bopanna has had a good year by most standards. He scored doubles wins at the APIA International in Sydney, the Dubai Duty Free Tennis Championships, the Matua Madrid Open and the Mercedes Cup in Stuttgart. In November, Bopanna and his doubles partner Florin Mergea beat top seeded Bryan brothers at the group stage and stormed into the finals of the ATP World Tour Finals, where they lost to the Dutch-Romanian pair of Jean-Julien Rojer and Horia Tecau. At rank 13, Bopanna is the highest ranked Indian in the men's doubles circuit.
Fast Fact: In 2009, Bopanna had a bet with his trainer that both would shave their heads if he ever reached the quarterfinals of Wimbledon. He achieved the feat next year itself.