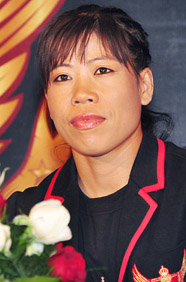 The Olympic bronze medallist has used her fame and earnings from the 14 brands that she endorses to popularise the sport. The construction of her academy in Longol village near Imphal is nearly complete, but Kom isn't ready to hang up her gloves just yet. She has been training and has repeatedly made clear her intention to fight for a medal at the 2016 Rio Olympics.
Fast Fact: ScreenYug and Aditya Horizons are developing an animation series with a young Mary Kom as its protagonist. It is titled Mary Kom Jr.