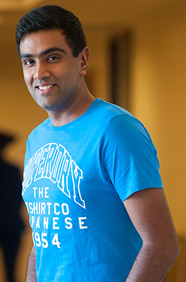 After a lean spell in 2014, the off-break bowler engineered a big comeback this year to regain his position as India's bowling spearhead. He has emerged as the highest wicket-taker in Tests in 2015. In August, his 21-wicket haul in the India-Sri Lanka Test series won him the Man of the Series award, and in November, he became the fastest Indian bowler to reach 150 Test wickets. Ashwin was also conferred the Arjuna Award in July this year.
Fast Fact: Ashwin was an opening batsman in the India under-17 side.