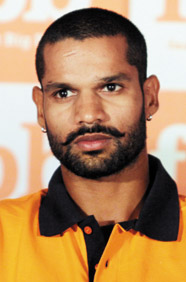 India's opening batsman had a relatively good start in the period under review with consecutive Test centuries against Bangladesh and Sri Lanka. In the one-day format, however, he has been inconsistent with his form since the 2015 World Cup. Yet, the batsman from Delhi remains one of the most exciting openers on the circuit, especially now that Virender Sehwag has retired from the game. Dhawan is also the face of well-known Indian brands such as Canara Bank and the Future Group's Big Bazaar.
Fast Fact: The southpaw holds the distinction of scoring the fastest century on debut, reaching the landmark in just 85 balls against Australia in Mohali in 2013. He went on to score 187.