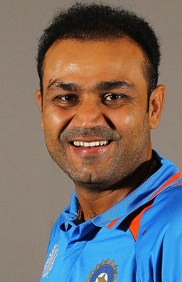 At his peak, Virender Sehwag was among the world's most formidable batsmen. He retired from international cricket in October 2015 and has since acquired a significant following on an unlikely pitch: Twitter. With over 7.5 million followers, Sehwag uses his faux bully pulpit to troll fellow cricketers and dish out advice on issues both social and political, all with the characteristic wit that audiences saw glimpses of even during his cricketing career. He is now starring in a web series titled Viru Ke Funde on Vuclip's video streaming platform, Viu.
Fast Fact: Sehwag was handed a one-match ban on his Test debut by match referee Mike Denness.