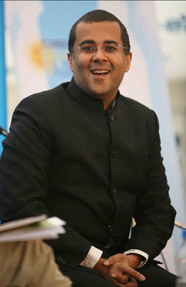 Though Chetan Bhagat's new book One Indian Girl was published outside of our period under consideration, it started garnering attention way back in January, when the author started tweeting about it, and reportedly broke previous pre-order records when it came up for pre-order in August. He's seen a meteoric rise on our list, from No 66 last year to No 40 in 2016. Bhagat has also been working on the screenplay of Half Girlfriend, based on his book of the same name, which came out in 2014. The movie, which stars Arjun Kapoor and Shraddha Kapoor, is set to release in May 2017.
Fast Fact: To understand women better and as part of research for his latest book, which is written from the point of view of a girl, Bhagat even got waxing done.