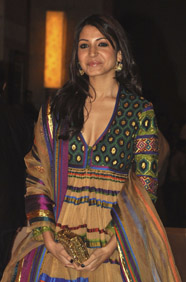 The success of Sultan (2016) underscored her mettle as an actor of substance, but she fell from Rank 19 last year to No 36 on our list this year. Anushka Sharma's performance as a state-level wrestler, who gives up the sport after becoming pregnant, earned her critical acclaim. She followed this up with another strong performance in Ae Dil Hai Mushkil (2016)—outside of our time frame. She is now focusing on her next home production, Phillauri, where she plays the female lead opposite Diljit Dosanjh. She is co-producing the film with Fox Star Studios.
Fast Fact: Anushka Sharma is the sister of film producer Kamlesh Sharma, who was a former under 19-Ranji player representing Bengaluru.