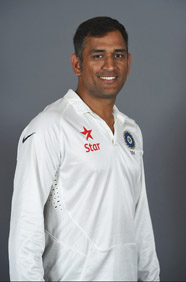 Though MS Dhoni retired from Tests in December 2014, his fame quotient shot up this year because of a biopic on him titled MS Dhoni: The Untold Story (2016). The movie, with Sushant Singh Rajput in the lead, earned more than Rs 130 crore in India. In the period under review, Dhoni also played 18 ODIs for 490 runs (average 35), drawing 28 dismissals as a wicketkeeper, and 23 T20 games, making 263 runs (average 43) with 27 dismissals behind the stumps.
Fast Fact: Dhoni was conferred the honorary rank of Lt Colonel by the Indian Territorial Army in November 2011.