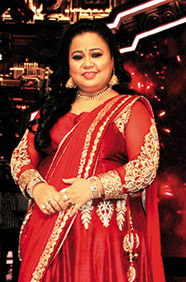 Singh first rose to prominence with her third spot finish in the fourth season of The Great Indian Laughter Challenge. She has since appeared across a whole gamut of reality shows on Indian television, including Nach Baliye, India's Got Talent, Bigg Boss, Comedy Circus and Jhalak Dikhhla Jaa. In the past year, Singh has appeared in Comedy Nights Live, a replacement for Kapil Sharma's Comedy Nights with Kapil, as well as Comedy Nights Bachao on Colors. A debutante on our list, she also made her film debut with Sanam Re this year.
Fast Fact: Singh is a former national level archer.