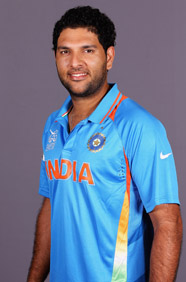 Yuvraj Singh made a comeback to the Indian T20 team this year, nearly two years after he played his last international match in 2014, but hobbled out of the T20 World Cup with an ankle injury. In the IPL, he was snapped up by Sunrisers Hyderabad for Rs 7 crore, half of what Delhi Daredevils paid for him in 2015, but steep enough to be one of the costliest buys in this year's auction. He ended the tournament with an under-par performance, an average of 26.22 from 10 matches. On the personal front, he began a new innings in November, getting married to actor Hazel Keech.
Fast Fact: Yuvraj was the national under-14 roller skating champion before his father forced him to focus on cricket.