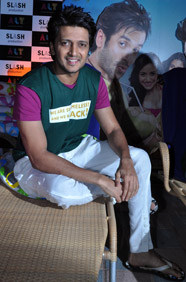 Riteish Deshmukh starred in a string of flops like Kya Kool Hain Hum 3, Mastizaade, Great Grand Masti and Banjo during the period under review. Only Housefull 3 was a silver lining, crossing Rs 100 crore at the box office. It was all good news on the personal front though: Deshmukh became a father for the second time in June 2016.
Fast Fact: He has designed the office premises of Shah Rukh Khan and wife Gauri's film production company, Red Chillies Entertainments.