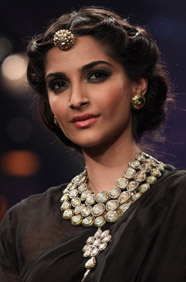 Sonam Kapoor shot up by eight places in our rankings. She had two hits to her credit—Sooraj Barjatya's Prem Ratan Dhan Payo and Ram Madhvani's Neerja for which she garnered immense praise from audiences and critics alike. Outside of films, Kapoor appeared in two music videos—'The Shine Song' featuring Arjun Kanungo and Coldplay's 'Hymn for the Weekend'. The style diva also launched her own app to allow fans to stay connected. Next year, she will be seen in Veerey Di Wedding with Kareena Kapoor-Khan and Swara Bhaskar.
Fast Fact: Actor Ranveer Singh is her maternal cousin.