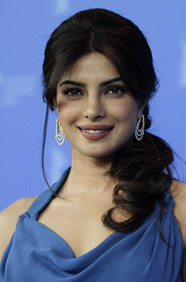 Priyanka Chopra breaks into the top 10 on our list for the first time this year. She had an eventful past 12 months with her two film releases Jai Gangaajal (2016) and Sanjay Leela Bhansali's Bajirao Mastani (2015) winning acclaim. Internationally, she continues to attract attention with a strong television presence. Quantico, in which Chopra plays the role of FBI agent Alex Parrish, is in its second season. She is now looking forward to the launch of her film Baywatch, scheduled for release in mid-2017. Earlier this year, Chopra lent her voice to the character of Kaa the python in the Hindi version of Disney's The Jungle Book. She also lent her voice to the video game Marvel Avengers Academy.
Fast Fact: Priyanka Chopra was one of the presenters at the 88th Academy Awards in 2016.