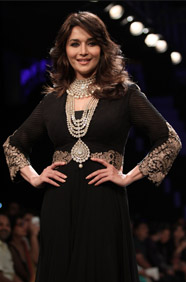 Bollywood's most popular heroine of the 1990s is rarely seen in movies these days. But she continues to be active on television, appearing as a judge in the 2016 season of So You Think You Can Dance (India). Despite her absence from films, she maintains a high rank, as revenues have been aided by several brand endorsements.
Fast Fact: The only Hindi movie her husband Shriram Nene ever watched before marriage was the 1977 Amitabh Bachchan-starrer Amar Akbar Anthony.