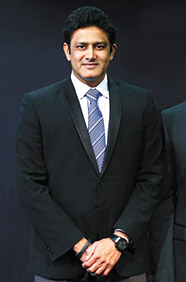 The former Indian cricket captain was appointed coach of the national team for a year in January 2016. His application for the job came as a surprise to many. He had never expressed interest previously though he was earlier chief mentor for the Royal Challengers Bangalore and Mumbai Indians teams in the Indian Premier League. His stint as coach has yielded fruitful results thus far with series wins against the West Indies, New Zealand and England.
Fast Fact: Anil Kumble was inducted to the ICC Cricket Hall of Fame in 2015.